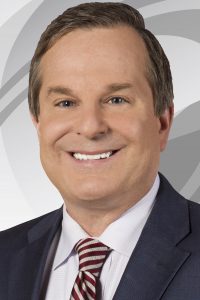 Rich is the co- anchor of Six In The Morning, the city’s highest rated local morning news show. Rich became a news anchor by following the same career path as many other successful people in broadcasting. He first worked in smaller cities to gain experience before moving to larger markets and advanced from jobs behind the camera, to sportscasting to news anchoring. He credits his willingness to move in order to gain experience as one of the key reasons he was able to become a news anchor in a large television market like Tulsa. Besides being a broadcaster, Rich is also an accomplished songwriter, musician and vocalist and still writes songs for the Children’s Hospital Telethon in New Orleans where he worked for thirteen years as a sports caster and news anchor before coming to Tulsa.

Television is one of the most important mediums for journalism because it is where 85% of people get most of their news. Rich talks about when it really hit him how important news programing can be to television viewers and the responsibility that comes with the new anchor’s job. While he was working as the Sports Director at WDSU-TV in New Orleans, Hurricane Katrina made landfall and changed everything. He shifted full time to news.That position let him see firsthand how the information his station was providing viewers was saving lives every day. Even when there is not this kind of emergency, he and his producers along with the rest of the News On 6 news team work hard to deliver information that will be useful to their viewers and help keep people safe.

Rich’s article will be of interest to all of you considering a career in broadcast journalism whether that includes on-air broadcasting, production, directing or photography. All these careers are part of a large team that works together to bring television news programs to the public.

When I was growing up, my family lived just outside of Chicago and then in Connecticut while my father commuted to New York City. My father was a corporate attorney and a great influence in my life. He taught me a strong work ethic and always encouraged me to pursue my own personal goals. I was a voracious reader growing up and still am. I keep two or three books on my night stand and read every evening. Because I read a lot, I appreciated the creative writing of authors who went out of the bounds of regular literature. I took creative writing classes when I was in high school and decided that I wanted to become a broadcast journalist, a career where I thought I would be able to do my own original work. I chose the University of Georgia’s journalism school because it was highly rated and because after growing up in the Midwest I was tired of snow. I graduated with a degree in television production, which required good writing skills and creativity to develop scripts that incorporated video and audio.

While I was in college, my father got a job in New Orleans. I loved the city and decided I wanted to get a job there as a director for a local television station after I graduated. My senior year at Georgia, I went to New Orleans and visited the local stations and asked them about job openings. But I didn’t get any offers. So my Dad rented me a car and encouraged me to go to other cities in Louisiana. I first went to Baton Rouge and called on their television stations, but I didn’t do any better there. Next I went to Lafayette where I got hired for a job in the production department of a local station.

Lafayette was city of about one hundred and twenty thousand that was considered the heart of Cajun culture in Louisiana. I started in production, including directing newscasts, before the sports caster at the station took me under his wing. He first had me doing photography and production for his program. But soon he gave me the chance to get on the other side of the camera. I did a number of videos during the time I worked for him and put together a package that showed me doing different sports news pieces, including some videos I liked that didn’t get on air. I sent them to other television stations and, on the strength of that package, got a job as a sports caster in Tallahassee, Florida with a population of about one hundred and eighty thousand, fifty percent larger than Lafayette. After two years, I moved to a job as the sports caster at a television station in Baton Rouge, the capital of Louisiana. The city was a much larger television market than Tallahassee and had a population of about two hundred and twenty thousand with over eight hundred thousand in the surrounding area. I stayed there for two years and then went to Oklahoma City as a sports caster, where I also met my wife. Oklahoma City was an even larger market than Baton Rouge and coincidentally also another state capital. It is the largest city in Oklahoma with a population of about eight hundred and fifty thousand and another million four hundred thousand in the surrounding area. This job gave me experience working in a large television market. I stayed there for five years until I had a chance to go back to New Orleans in 1994 as a sports caster. Because I was willing to move, I was able to work my way up and get experience in larger and larger television markets. In eleven years I went full circle and was able to reach my original goal when I graduated from college of working at a television station in New Orleans.

I loved New Orleans and as a sports caster covered the Saints, which is the professional football team I still follow. I was able to get to know the Saints coaches, like Mike Ditka and the players, as well as the college teams. It was always exciting to go to a stadium like LSU’s and cover a college game in a stadium with a hundred thousand fans. I was also involved in local charities including my favorite, the Children’s Hospital. I am a singer, musician and songwriter and each year wrote and performed an original song for the hospital’s fund raising program. Even though I now live in Tulsa, I still go back each year to be part of their telethon. This year we plan to release a twelve song CD to raise money for the hospital. Here is a link to a video of me performing one of the songs I wrote:

I shifted from the sports desk to news anchor in 2005 because of Hurricane Katrina. When the hurricane hit, we quit broadcasting anything but hard news and the weather. That experience taught me how important broadcast journalism is to our viewers. Every day we could see firsthand how our broadcasts saved lives and helped people by giving them information about things like evacuation routes, where bridges were out, the location of public shelters and medical services and where food and water were being distributed. I had been a news anchor in New Orleans for two years when I got a call from a friend at New On 6 in Tulsa telling me about their morning news show Six In The Morning and asked me if I was interested in being a co- anchor. I took the job, in part, because Tulsa is the sixty-third largest television market in the country and News On 6 is the highest rated station in that market. I also like to work with good people. LeAnne Taylor, my co-anchor, and Alan Crone, our meteorologist, are two of the best in the business. Another thing that was important to me was that the owners of the station, Griffin Communications, were known to be good operators who also own the most successful station in Oklahoma City. This affiliation lets us share news pieces, which broadens the news programing we can offer our viewers. We also have an excellent production and photojournalism staff working on the show.

What It is Like to Be a Morning News Anchor

Alan, LeAnne and I as well as all the other people who are part of the show work hard to give our viewers the important information they need to start their day. The producers are at the studio at 1 AM writing scripts. We get there at 3:30 to review the scripts and often add a few things ourselves before we begin broadcasting at 4:30. The show runs until 9 o’clock, which means we are on the air for four and a half hours. After the regular show, we also do a few pieces that are posted on the station’s web page and social media.

While our show is scripted, we try to make a personal connection with our viewers. People we meet say they feel they already know us because when they see our show it is like they were talking to a friend. I think we make an even more personal connection with our viewers than some other news anchors because we are the first news they hear that day. The show gets a little more informal the last hour and we do improvise a little. But we always make sure we give our viewers the information we feel can make a difference in their lives that day.

We also have to be flexible in our format. News is always breaking at the local, national and international level. So we have to decide with our producers how important each breaking story is, which ones to run and for how long.

When you watch a news story on our show or any television news program, you see that our producers usually have put together a visual story for us to present as part of the script. They take the work done by the video photographer and sometimes audio from news reporters and piece together the footage with the script to create the content for the news segment. We also have about ten reporters in our newsroom who we often go to for live reports on important local news.

While I really enjoy my job, sometimes getting up and being at the studio at 3:50 in the morning can be tough. Everybody needs their sleep and it takes some adjustments to be able to get to bed early enough to get the rest I need.

Advice on How to Become a Broadcast Journalist

Broadcast journalism is a highly competitive field. You need to get the best education you can afford and be willing to start in smaller markets when you graduate so you can gain experience. This means that you must be willing to move. Most successful news anchors in large markets followed the same career path I did where I worked my way up. Building personal networks in the industry is also important. The hours you work as a broadcast journalist can be a challenge. Being a morning news anchor like I am means you have to be at the studio early and evening news anchors have to stay late. But I have always felt that sacrifice has been worth it because I am doing something I enjoy and know every day I can have a positive impact on many people lives.

The salaries of news reporters are lower than those of news anchors and vary widely. According to the BLS, the average annual salary of a reporter or correspondent was $44,360 a year in May 2013. The top ten percent earned $81,940 or more a year, while the bottom ten percent earned $21,090 or less.