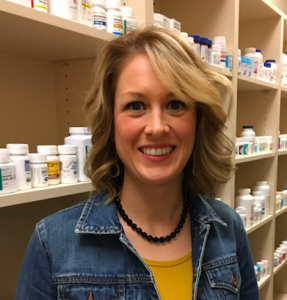 Nicole is an instructor for the Pharmacy Technician program at Tulsa Tech’s Health Sciences Center. This program is designed for high school seniors and prepares them for the national certification exam after they graduate. With this certification, students are able to start out earning a good wage with their high school diploma. For people who want to go on to college, being a pharmacy technician is a great way to earn money while you are going to school, because many pharmacies are open twenty-four hours a day or some have extended hours making work schedules flexible. Nicole paid for most of her bachelor’s degree by working as a pharmacy tech while she attended college. Besides jobs in a retail pharmacy, pharmacy tech’s can also work in hospitals, where they can learn to fill floor stock, do sterile and non-sterile compounding, and work in specialized satellite pharmacies within the hospital. Pharmacy technicians can also work in compounding pharmacies, where they learn to make specialized medication dosages.

Demand for pharmacy technicians is expected to be strong for many years because of the aging population and increases in chronic diseases like diabetes among all age groups, which is increasing the demand for pharmaceuticals.

I began working at a pharmacy when I was just fifteen. I had watched the pharmacists fill my mother’s prescriptions and was always interested in what they did. When I first started, I could only work as a cashier in the pharmacy. But when I turned sixteen, I was able to work more hours and began training with the pharmacist to be a tech. Once I graduated high school, I was eligible to be an Oklahoma state-certified pharmacy technician. I liked working with customers, learning about their medications and truly developed a passion for pharmacy. I went to college with the intention of becoming a pharmacist. I found that I really didn’t think I would like to be a pharmacist, even though I still enjoyed being a technician. I began to see that being a pharmacist was often very stressful and the hours were not always ideal. I earned a Bachelor’s in Biological Sciences from SWOSU. While in college, I worked at Walgreen’s, where I did retail pharmacy and also basic compounding as a nationally-certified pharmacy technician. I also worked at St. Francis Hospital as a pharmacy technician, where I learned to do sterile compounding and other hospital pharmacy duties. After I graduated from college, I took on more responsibility with Walgreen’s and became an assistant manager, but the hours were not ideal. When a job for a pharmacy tech instructor at Tulsa Tech came up, I applied and found that I really enjoyed teaching.

I was able to put myself though college working as a pharmacy tech. Most pharmacies are open twenty-four hours, so you can work hours that will not interfere with your class schedule. You can also move around to different stores where they needed help if you work for a big chain like I did. I was able to work in a pharmacy near my college during the week and then at my local pharmacy when I came home on the weekend. Plus the hours were flexible. If it was the week of finals, I did not work at all. But the next week, between semesters, I could work forty hours. I usually had to say “no” to jobs because there were so many options. I also made what I considered to be really good money compared to my friends who were also working and going to college. I was making about double minimum wage and paid for most of my expenses without taking out many student loans. You can do this as well, even if you are interested in a different career path for your future. Having a career as a pharmacy technician is also very rewarding.

There are many people who are graduating college with a degree, but have no technical skills and end up working for minimum wage. I know that having a technical skill, like being a pharmacy tech, along with the college degree opened up many doors for me. My generation is one where just getting a college degree doesn’t necessarily mean that you can get a good job. It is important to get a degree where you learn some marketable skills.

What Pharmacy Technicians Do

Here is a list of what most pharmacy technicians working in a retail pharmacy do each day:

How to Become a Pharmacy Technician

You do not have to be nationally-certified to become a pharmacy tech in Oklahoma, although you do have to be licensed through the Oklahoma State Board of Pharmacy. You could go to a pharmacy where they might be willing to put you in an apprenticeship program and you can then become state licensed. But certified technicians earn more money than non-certified technicians and have more room to advance within their pharmacy. To become nationally-certified, there are two exams that are offered. One is through the National Healthcare Association. The other is through the Pharmacy Technician Certification Board. The PTCB is the most recognized exam. Our classes are designed to prepare students for that exam. The PTCB exam costs $129. All states 50 recognize the PTCB exam.

My former students are starting out earning between $11 and $14 per hour. Full time pharmacy technicians can get health insurance, matching 401ks and often bonuses based on the pharmacy’s prescription sales. It is a wonderful career path, but if you decide later you want to go to pharmacy school and happen to be working as a pharmacy technician, some pharmacies will offer tuition assistance programs.

If you are not sure what you want to do in the medical field, being a pharmacy tech is great, because you are going to be dealing with different medications in any medical career you choose. This will give you the basic knowledge you need about medications. Some students get into other medical careers and find they don’t like dealing with directly with patients or bodily fluids. Pharmacy tech’s still help patients even though it is not direct patient care. It is a wonderful alternative to direct patient care in the medical field.

Our program at Tulsa Tech is designed for seniors in high school graduating at the end of our school year. They take their classes from August through May and can come either at 8:00 to 10:50 or 12:00 to 2:50. Students can get a science credit at their high school for our anatomy class and elective credits for the other classes. Once they have their diploma and transcript, they are then ready to sit for the national PTCB exam.

Many people think that when they come into our program they need to know chemistry. That is true if you want to be a pharmacist. To be a technician however, the big thing is algebra-based math. We even have a math specialist at Tulsa Tech if you need help improving your math skills.

Here are the classes taught in our program:

We provide eighth grade tours to give students an idea of our program and do summer tours and camps as well. Our Career Advisors also keep in touch with career counselors at Tulsa area high schools.

Classes are free to high school students in our area. They only have to pay for uniforms and school supplies. Students are required to do 160 clinical hours and it is important they can provide their own transportation.

If you have an interest in this program, you can apply online at tulsatech.edu. Applications can also be obtained in the counseling offices on any of the campuses; at the Career Services Center located on the Lemley Memorial Campus; or by calling 918-828-5000.

US Bureau of Labor Statistics for Pharmacy Technicians

The average wage in the top industries in which they worked were as follows: