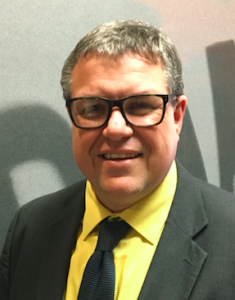 Richard is a Criminal Justice instructor at Tulsa Tech who has developed a unique program for his students. Unlike most professions where you must have a degree or certification and be technically proficient to get an entry-level job, law enforcement agencies like to train new recruits themselves in their processes and procedures. So instead of a high level of technical proficiency, employers are looking for people who have shown a heart for community service, have a diversity of life and educational experiences and who can think for themselves. These are all personal characteristics they know make good officers. Consequently, Richard has developed extracurricular community service programs, in addition to an academic curriculum. His students have assisted in park revitalizations, volunteered at the Community Food Bank of Eastern Oklahoma and raised funds for the Special Olympics of Oklahoma. They have also been involved in mentoring programs, where his students have partnered with Tulsa’s Hawthorne Elementary School and the McClain Eighth Grade Center. The mentoring programs have improved the younger students reading scores and given his Tulsa Tech students the opportunity to demonstrate they are able to show kindness and compassion to others. All these extracurricular activities are done through the Forensics and Security Chapter of SkillsUSA, one of several extracurricular programs available to Tulsa Tech students. Members of Richard’s chapter have won thirty five national awards, one hundred and thirty four regional awards and Richard was named Oklahoma Advisor of the Year by SkillsUSA in three of the last four years.

I grew up in San Jose, California and graduated from high school there. My father passed away when I was twelve and my mother remarried in 1992. That year we moved to Oklahoma and I went to Rhema Bible College in Tulsa and then to North Central University in Minneapolis, where I earned a degree in theology in 1995. I then worked in the ministry for a few years and had my own small business. But after the terrorist attack on 9/11, I decided I wanted to be involved in law enforcement. This might not seem related to the ministry. But to me a law enforcement officer sees people at a cross roads of their life, often after they have made a bad decision and have broken the law. But I never thought these people did not deserve help. I got that attitude from my mom. She battled with dyslexia her whole life. Many people labeled her because of her dyslexia and she faced a lot of discrimination. But she always told me to never forget the little guy and to help other people. So I saw law enforcement as one way to fulfill what I believed was my calling to help others.

I took a job at the Tulsa Sheriff’s office in 2005, where I started as a Court Deputy. It was the best free legal education I could have gotten, because I had to sit through trials after I brought the inmate up from jail and process them after the trial concluded. Two years later, I went to the extradition division, where I picked up prisoners in other states. I did a lot of flying and driving trips. After two years as an extradition officer, I transitioned to the Bixby Police Department, because I wanted the chance to experience being a patrol officer. I had 210 arrests my first year, the most in the state of Oklahoma and was given several awards, including the Police Officer of the Year by the city and by the Fraternal Order of Police. I was later awarded the Police Officer of the Year in 2009 by the Police Chiefs of Oklahoma. That year was the height of my career as a patrol officer. My family and I were taking care of my mother in our home, when she had a massive stroke in May. That same day, I received a call from my captain that I was needed for a hostage standoff at an apartment complex. When I went to the scene, the negotiations were not going anywhere but it all ended quickly without anyone harming the hostage. After that incident, I went to the hospital and saw my mother. She was having trouble breathing and I watched her slowly pass away over the next two weeks. Both events happening at about the same time affected me to the point that I knew I needed some type of career transition. A position opened at Tulsa Tech for a criminal justice instructor and I applied. I found I liked teaching and have since earned a Master’s in Education from Oklahoma State.

My Program at Tulsa Tech

What makes Tulsa Tech so successful is that students who graduate from our programs can go out and find jobs. When I told other people in law enforcement that I was going to be an instructor at Tulsa Tech, they all told me I needed to teach my students to have a heart for service, to act with integrity and not just focus on criminal justice. Each of them said their departments had their own methods for teaching new recruits how they wanted different processes and procedures done. This makes law enforcement different from other careers, where you need a certification or specific degree to show you have mastered the technical aspects of a particular job.

Instead of technical training, law enforcement agencies want people with diversified experiences who can think for themselves. I knew that community service was a good way to teach students this part of what they needed to succeed as an officer. So when I was developing my curriculum, I looked for ways to give those kinds of opportunities to my students to get them out of their desks and into the community.

I also want to show my students what different law enforcement officers do, so they can see their final goal. For example in my forensic science class, I bring in someone from the FBI, so the students know what the FBI looks for in criminal investigations. I may take them on a field trip to a dispatch center if they are involved with that part of the class. For my class on police functions and fundamentals, I bring in someone in from a police SWAT team.

Students have three immediate job options after you complete one of our two programs and graduate from high school. You can get a job in the industry as a dispatcher, work in private security or go into the military.

If you want to become a police officer, you will need to go on to college and get either an associate’s or a bachelor’s degree, depending on the law enforcement agency. For example, the Tulsa Police Department requires a four-year degree but has higher starting salaries than in other parts of Oklahoma, where they require only an associate’s degree. There are also variations from state to state. For example, most Texas police departments only require two-year degree. It is also good to learn Spanish. People who are bilingual are in high demand for various jobs in law enforcement.

If you do decide to go on to college to become an officer, don’t make the mistake of getting a criminal justice degree. I tell my students that is the worst thing they could do. As I mentioned earlier, law enforcement likes to hire people who are diversified in terms of their life experiences and their education. So get a degree in college that you can fall back on because anything can happen in a law enforcement career. You could be injured and there is always the possibility of layoffs if there are budget cuts. Plus, you have the option to retire early as a police officer when you are still young enough to start a second career, along with receiving your pension.

Our curriculum is comprised of two one-year programs, Practical Criminal Law and Forensics and Security. You can begin in either of these programs your junior year and take the other your senior year, if you want to learn more about career opportunities in law enforcement. But the opportunities for job placement after high school are still the same regardless of whether you take one or two years.

As part of these programs, we offer certification in dispatch and CLEET for unarmed security, CPR and three National Institute of Management Certifications

These classes show you how to apply police tactics, including accident investigation, 911 dispatch, and evidence gathering, how to exercise, as well as the proper use of firearms and other law enforcement equipment.

Extracurricular activities programs are part of the Forensics and Security Chapter of SkillsUSA. All Tulsa Tech programs have extracurricular Career and Technical Student Organizations (CTSOs) you can join:

These CTSOs develop leadership skills, team building, and have opportunities for community service. They all have regional competitions where the winners then move on to state and national competitions.

US Bureau of Labor Statistics for Police and Detectives

Median annual wages for police and detectives in May 2015 were as follows:

Many agencies provide officers with an allowance for uniforms, as well as extensive benefits and the option to retire at an age that is younger than the typical retirement age.

Overall job prospects are expected to be good. Applicants with a bachelor’s degree and law enforcement or military experience, especially investigative experience, as well as those who speak more than one language, should have the best job opportunities.

Because the level of government spending determines the level of employment for police and detectives, the number of job opportunities can vary from year to year and from place to place.