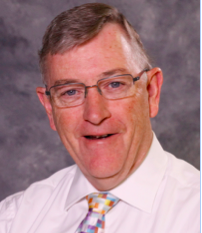 Shea has been the Director of Tulsa Tech’s STEM Academy since 2013. STEM is an acronym for Science, Technology, Engineering and Math. The curriculum is designed to prepare high school students for college programs in engineering and includes not just academic classes, but also hands-on projects where students can see how their course work in subjects like mathematics and physics is used to solve real world problems. The Academy has been highly successful under Shea’s leadership. Between 85% and 90% of each year’s Academy graduates go on to college and graduate with their engineering degree. While the Tulsa Tech STEM Academy graduates about one hundred students each year, over twice as many students apply. Many are turned down because of classroom space and resource limitations, not because these students do not have the academic qualifications.

Shea has had an interesting career. He graduated from the U.S. Naval Academy in 1981, where he received his Bachelor of Science in General Engineering. He went on to become a Navy pilot and then was part of an Admirals’ staff, where he was a battle group planner during the first Gulf War. He left the Navy in 1992 and returned to Tulsa as an officer in the Naval Reserve where he continued to fly. He then got his teaching certificate and started teaching high school math. A few years later he earned his Master’s in Education and began working in high school administration. He started at Tulsa Tech as the Assistant Director of the Riverside Campus supervising aviation programs and was later appointed Instructional Dean and now Director of the STEM Academy.

Engineers have some of the highest starting salaries of any undergraduate degree, as well some of the highest projected lifetime earnings. It is also a profession where many people take what they have learned and start their own businesses. There are also more opportunities for scholarships and financial aid in the fields of science, technology, engineering and mathematics (STEM) than most other college majors, which can help reduce the cost of your education. Plus, engineering students with good grades can often get well-paying internships during the summer after their sophomore year. Tulsa Tech’s STEM Academy classes also teach skills that will allow you to get a job right out of high school, which in many cases can help supplement your income while you are going to college.

I grew up in Ponca City, Oklahoma where my Dad was a long time petroleum engineer for Conoco. When I graduated from high school, I wanted to be a U.S. Naval officer and applied to the Naval Academy. But I was not accepted the year that I applied. Instead, I was granted a U.S. Naval Academy Foundation Scholarship with the stipulation that I apply again the next year. If I was then accepted, I then either had to go to the Academy or pay back the scholarship. I used the scholarship to go to Texas A&M with the idea of becoming a petroleum engineer like my father. But when I applied again to the Naval Academy, I was accepted. I transferred to the Naval Academy and graduated with a degree in general engineering. Looking back it was a good choice that afforded me tremendous opportunities. For example, after I graduated from the Academy I went to flight school in Pensacola, Florida and then multi engine school in Corpus Christi. As a newly winged pilot I was sent to Jacksonville, where I learned to fly the Lockheed P-3 Orion. This was a four-engine anti-submarine and surveillance aircraft. A naval officer is also taught how to be a manager. You learn to train people and prepare them to advance in their careers, which was something that I really enjoyed. I became the lead pilot for my squadron, and as a junior officer I was afforded the opportunity to evaluate every pilot. This job was usually reserved for someone more senior. I then went to a training squadron in Corpus Christi, where I taught multi engine pilots and was later assigned to the admiral’s staff to fill the role as the Air Operations Officer. I arrived in this position just a few months before Iraq invaded Kuwait and started the first Gulf War. I was assigned to a battle group when the war began and had to learn anti-air warfare. I had only been trained in anti-submarine warfare, so I read about twenty hours a day for several weeks to get up to speed with what I was being tasked to do. I ended up going to the war zone as part of what was called the tactical staff, a position I found both challenging and rewarding. I was on the ship coordinating air battle plans and stood as the battle group’s watch officer. We initially spent nine months in the Middle East, returned home for three months and then did two shorter rotations back and forth from the war zone. During the months following Desert Storm, the Navy reduced half of the P3 squadrons. I was due to go back to a P-3 squadron as a department head, but there was not a vacant position for me. Even though I had performed well as a naval officer, I was forced to leave active duty. That was devastating because I thought I was going to have a long career in the Navy.

Afterwards, I settled in Tulsa and started looking for job opportunities. The airline industry was also downsizing and there were no openings for airline pilots. I was in the Naval Reserve so I could continue flying, which was something I loved. I had been a good Navy instructor and a friend told me I should consider teaching. I decided to take his advice, returned to school and earned my teaching certificate. I started teaching high school math and at the same time went to Northeastern State University (NSU), where three years later I received my Masters in Education Administration. I continued to teach math at Claremore High School and became an Assistant Principal in 2002. I saw an ad a couple years later from Tulsa Tech where they were looking for someone to supervise their aviation programs, which included aviation and maintenance technology. I applied and was offered that job. Four years later, I accepted a position as an Instructional Dean which one of the many programs I worked with was pre-engineering. A few years thereafter I became the Director of STEM.

Our primary focus at the Academy is to prepare junior and senior high school students for college engineering programs. We do this by teaching the Project Lead the Way Pre-Engineering curriculum along with the higher level mathematics and science courses. However, equally important as the academics, we help our students make the transition to college by bringing in people from colleges to speak to our students about applications, scholarship opportunities, campus life, and we encourage them to take tours of college campuses. We also help students prepare for college entrance exams, and give them opportunities for leadership and public speaking so that they gain confidence and present themselves well.

In addition to the Academy, we have a few STEM instructors at our sending high schools, which we now call off-site programs. This can really help a student that has a heavy class load and cannot attend the STEM Academy, but they can take some of these courses at their own high school. These students are also expected to take the appropriate sequence of math and science courses each year to be successful their junior and senior years while attending the Academy. We have a group of career advisors who go out to all the area high schools, recruit students and talk to counselors, who know which students have the aptitude for pre-engineering and other STEM classes. Additionally, we try to plant a seed in middle school students, where we encourage them to begin building their math skills. We want them to have confidence that they can succeed in our STEM classes and do things like build robots when they come to the Academy.

The Academy draws students from 14 area school districts and home schools that encompass Tulsa County and parts of surrounding counties. There are other CareerTech programs throughout the state that have similar programs and cover most of the state’s high school districts.

Students at the Academy can select from eight pre-engineering courses. There is also a senior capstone project that shows them how courses like calculus and physics are applied in real world situations. Each student, as part of a team, is required to plan, develop and produce a model of a project where they use the engineering process all the way through. The teams then present their project to a panel of professional engineers. This experience is closest we can get the students to appreciate and understand what an engineer actually does. The teams work collaboratively to come up with a real problem, brainstorm ideas to solve it, research and design it, and document everything they do in an engineer’s notebook. We emphasize that it’s not just building their prototype, but also about the process that shows the original work that can be duplicated if it is put into production. We also want students to understand what is involved in successfully commercializing their idea so we bring in patent lawyers to explain the process. These capstone projects are usually presented in April of their senior year and judged by professional engineers in the community.

We graduate about one hundred students a year and ninety-eight percent go on to college, and between 85-90% graduate from college as engineers. Here is an example of a recent STEM Academy graduate, Lucas Kinion:

Lucas is a 2010 Tulsa Tech STEM Academy and Union High School graduate who was awarded a scholarship from Oklahoma State University based on ACT scores. There he studied electrical engineering and is now heading to NASA. Here is a link where you can read more about Lucas:

Overview of a Capstone Project

How to Apply to the STEM Academy

If you have an interest in the program you can apply online at tulsatech.edu. Applications can also be obtained in the counseling offices on any Tulsa Tech campus; at the Career Services Center located on the Lemley Memorial Campus; or by calling 918.828.5000.

Tuition is free to high school student in Tulsa County

US Bureau of Labor Statistics for Engineers

Engineering is widely considered as one of the most lucrative and in-demand career choices, with multiple engineering disciplines and job types, as well as salaries that can exceed $100k per year once the engineer has some experience behind them. Engineering degrees make up 10 of the top 17 highest paid degrees at the time of this 2015 survey.