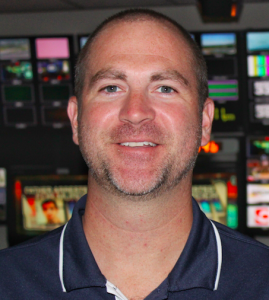 John is the Assistant Director of Television Production for Griffin Communication’s Channel 6 where he personally directs the station’s prime time evening news program and supervises five other directors and one audio operator who work on the channel’s other live news broadcasts. Besides keeping the station’s viewers aware of important news, Channel 6 prides itself on its live storm coverage and breaking news. The station’s news directors along with the weather anchors and other newsroom staff often work long hours when storms threaten the local area in order to give their viewers current information on dangerous weather conditions to help keep them safe.

John did not start out wanting to be a television director when he graduated from high school. He was an athlete and played baseball at a college in Texas. He planned on getting a degree in physical education and then teaching. But after two years, he decided to come back to Oklahoma where he earned a BA at the University of Science and Arts in Chickasha. After he graduated in 2002, John was able to get a job in the Tulsa area with a company that produced television shows for ESPN. He worked there for nine years and gained the experience he needed producing and directing sports programs to be able to get a job as a live television news director at Channel 6.

Being a news program director is a fast paced job where you are in charge of all the technical aspect of a live show. But before you can become a director, you must first have experience with production equipment like video switchers, audio consoles, news cameras and control room operating systems. The director is also a manager who leads a production crew that includes sound engineers, camera operators, videographers, graphics coordinators and the control room team.

Although John became a television director after taking on a variety of broadcasting jobs and learning about directing with the help of mentors at his previous company, most people entering broadcasting have at least an Associates degree in journalism or broadcast communications from programs like those taught at Tulsa Community College. But even with a two or even a four-year degree, no one becomes a TV news director without first getting experience working at other jobs in the newsroom. Besides knowing the technical parts of television broadcasting, a TV news director must also be able to manage a staff in the high-pressure environment that is part of a live television broadcast.

I grew up in Sands Springs, a town of about twenty thousand adjacent to Tulsa, and live there today with my three children. Growing up, I wanted to be a baseball player and teach. So when I graduated from high school, I went and played baseball at North Central Texas College and took classes in physical education. But after two years, I could see teaching PE was not a good idea and went back to Oklahoma to go to the University of Science and Arts in Chickasha where I got a BA in Applied Science. After I graduated in 2002, I was able to find a job in Tulsa with a private broadcast company called Winnercomm. The company began as a production company for horse races but grew rapidly and began doing national sports programing for ESPN. At one point they were supplying more than half of the ESPN Outdoors program block and were producing other sports entertainment programs.

My first job for Winnercomm was working on horse races including the Kentucky Derby, the Belmont and Preakness and going around the country doing Professional Rodeo Cowboy Association (PRCA) events. All this meant that I was on the road for twenty-five weeks out of the year working out of broadcast trucks. But I got a lot of experience and was able to work my way up to becoming a unit manager.

While I was at Winnercomm, they developed a weekly show for ESPN U called the “Big 12 This Week”. I told the directors working on the program that I wanted to learn more about directing and they were willing to teach me. Their mentoring was how I learned to be a Technical Director.

As a Technical Director you work in a production control room and operate the video switcher and associated devices and are in charge of the television camera crew. For a remote broadcast, the Technical Director will perform the same duties in a mobile production truck. It is the TD’s job to ensure all positions are manned and all equipment and facilities are checked out and ready before the live broadcast begins. During a live broadcast, the Technical Director will typically order camera cuts, switch video sources, perform live digital effects and transitions, and insert pre-recorded material, graphics and titles.

During the nine years I worked for Winnercomm, the company was sold twice, which made me a little nervous about my future with them. I also wanted to spend more time with my children rather than traveling half the year. So when a position opened up at Channel 6 directing newscasts, I took it. I was later promoted to Assistant Director of Production, which includes the supervision of other directors along with the people who work on the programs I direct like audio operators, graphics operators and camera operators. I have now been with Channel 6 for five years and still get a rush every time the “on air” light goes on and we begin our live broadcast.

What a Director Does Each Day

As the Director of a news program, I am responsible for the broadcast. I set the overall pace of the show and the placement and movement of video cameras, lighting equipment, microphones and graphics. This is done through a large control room panel and by communicating through headsets with the camera people, news anchors and other staff on the set and in the control room. Here is a picture of the full Channel 6 News set and one of me in the control room: 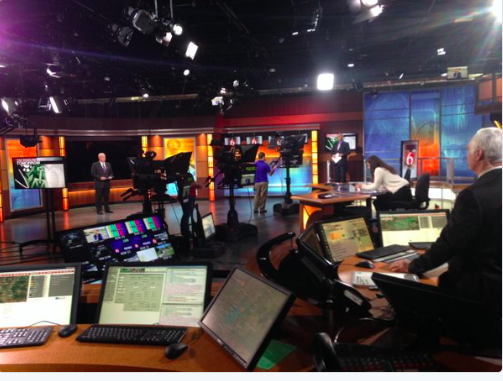 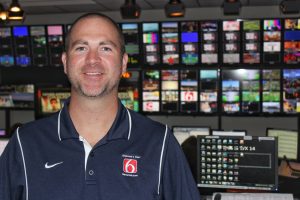 As the Director, I also work with the producers and news anchors to select the stories that are to be broadcast in the show’s time frame and also decide on cut-ins for breaking news stories and how it will affect the news script so that the show can be finished in its allotted time. You have to keep your team on the track.

One of the most exciting parts of the job is directing severe weather broadcasts. I have to coordinate a lot of people and information coming in from the helicopter and storm chasers and the weather radar and see that the information gets to our viewers so we can help keep them safe. The news is on 24/7 and when severe weather strikes, a director may start out at two o’clock in the afternoon and end up staying until three in the morning.

There are also mistakes made everyday in any live broadcast. You want to make sure that the viewers don’t see them. I do that with verbal commands for things like audio and the general news feed. I am also a perfectionist and DVR the shows I direct. When I get home at night I study them and look for ways to improve the broadcast.

How to become a Television Director

I still am excited every time the “on air” light goes on and really like the team spirit I feel working with everyone on the news set. I am also proud of how the news and weather programs I direct serve my community. I am a perfectionist and when I go home I watch recorded shows I directed to look for and ways I can improve the next broadcast. Severe weather programing is still a rush when we are coordinating with the helicopter and storm trackers and the weather anchors. But being a live television program director can be stressful. This is especially true when severe weather strikes and you will have to spend long hours at the studio until the storm passes. But despite the hours and stress that can come from doing a live broadcast, being a television director is a job that has given me a lot of personal satisfaction and is a career I would recommend to young people who like to work as part of a team in a fast paced environment.

US Bureau of Labor Statistics for Producers and Directors

In May 2015, the median annual wages for producers and directors in the top industries in which they worked were as follows:

Employment of producers and directors is projected to grow 9 percent from 2014 to 2024, faster than the average for all occupations. But there is expected to be intense completion for these jobs because many more people are interested in these careers that there will be jobs available.