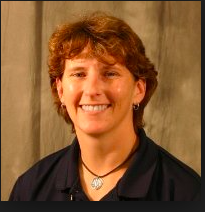 Sheryl is an airframe and power plant (A&P) instructor at Tulsa Tech and a FAA Designated Mechanical Examiner. She is also the coordinator for the school’s aviation programs. Prior to becoming an instructor at Tulsa Tech, she was an aircraft maintenance technician for Bombardier Aerospace, Atlantic Southwest Airlines, Delta Airlines, a simulator technician for a defense contractor, and a flight simulator technician for Flight Safety Boeing. Sheryl holds a Bachelors of Science in Technical and Industrial Education from Oklahoma State and an Associates of Science in Airframe Mechanics and Aircraft Maintenance Technology from the Community College of the Air Force and an Associates of Science in Computer Systems Networking and Telecommunications from Tarrant Community College.

In her article, Sheryl discusses what is required to become an aircraft maintenance technician and earn your Airframe and Power Plant certificates. With these certifications, you can get a job with the large airlines or smaller carriers as well as in general aviation where you would work on personal and corporate aircraft. There are now additional opportunities for people with this certification in related fields like wind turbines, theme parks, and space rocket development and testing. If you work for the larger airlines, you will work on one part of their large aircraft at a time like engines or different parts of the airframe and you would most likely work in groups. This is in contrast to general aviation where a single mechanic usually works by themselves on all parts of the smaller planes.

Sheryl also talks about the different ways you can get your A&P certificates through Tulsa Tech including a program where high school students can begin taking aircraft maintenance classes their junior and senior years. The school offers a number of scholarships and grants that will cover all or part of the tuition for those who qualify. You can also choose between full time programs during the day or part time programs in the evening. Going full time, the program can be completed in eighteen months and twenty-six to thirty months going part time.

I grew up in Tyler, Texas just east of Dallas. My parents never went to college but each of them was involved in running businesses and both owned a restaurant by the time they were twenty. I was a good athlete and played volleyball, basketball, and boy’s baseball in high school. We didn’t have a girls’ softball team. When I didn’t get any sports scholarships for college, I looked for another way to pay for my education. I decided to go into the military to get training and took the Defense Language Aptitude Test for the Air Force. I scored well and wanted to take classes in languages and become a translator. But those spots were full and I decided to get trained as an aircraft maintenance tech where I worked on F-16 and A-10 fighters.

After a little over five years on active duty, I separated and took a series of jobs first working on Army ground simulators for defense contractor PULAU Corp and flight simulators for Boeing and then as an aircraft mechanic for Delta. Unfortunately I started at Delta in June of 2001, just before 9/11. The airline industry slowed down after 9/11 and in 2003 I transferred to one of their regional carriers, Atlantic Southeast Airlines. I liked the variety of jobs I was able to do working for the smaller airline. But in 2004, I wanted to move to a different company and went to Tulsa to look for other options. Tulsa has the most aviation related companies located in one area in the nation. While searching, I found out about a job as an instructor at Tulsa Tech. Teaching was not something that I had previously considered, but I took the job and found I really liked teaching. While teaching I worked a short time at a small station at Tulsa International for Bombardier Aerospace doing line maintenance and later went back to school and earned a Bachelors of Science at Oklahoma State in Technical and Industrial Education in 2008. I have now been an instructor for twelve years and was recently name the coordinator of Tulsa Tech’s aviation programs, volunteer for Tulsa’s Airborn Demonstration Team as a maintenance crew member on it’s C-49 WWII plane, and volunteer every year at Oshkosh AirVenture West Ramp and KidVenture along with many of our Tulsa Tech students and A&P Instructors.

The Job of an Aviation Technician

Technicians who work on civilian aircraft have the FAA’s Airframe and Power Plant (A&P) certificates and are authorized to work on most parts of the aircraft, excluding flight instruments. These instruments are called avionics and require separate training and certification.

Here are some to the things you will do as an aviation technician with A&P certification:

All of the work you do as an aviation technician must meet the safety standards set by the Federal Aviation Administration (FAA) and the Occupational Health and Safety Administration (OSHA) and your work will be subject to inspection by a FAA certified inspector.

With the A&P certificates, you can get jobs where you are a generalist and work on many different types of aircraft, such as jets, piston-driven airplanes, and helicopters. But at large airlines, you will normally work on one section of an aircraft at a time, such as the engines, hydraulic systems, electrical systems or the airframe of a particular aircraft. There are now other areas outside aviation where you can work with these certificates like wind turbines where prop maintenance is similar to that of an aircraft. Theme parks have extremely strict maintenance standards and, although no federal certification is required to work on the rides, the technologies parallel aviation. We are seeing more and more private space launches and those companies need technicians and engineers.

People working at large airlines start out as a floor mechanic and work in groups. But as you gain experience, you can advance your career and become a crew chief, a quality assurance inspector and you could eventually become a director of maintenance, which usually takes at least seven years of experience.

You will also have to take continuing education on new FAA regulations and additional classes to learn about the maintenance of new parts and new aircraft used by your employer.

You don’t have to be big and strong to be an aircraft technician. Also there are more women entering the field and 20% of our current graduates are women. But to be able to do the jobs and be a good technician, you do need to have some basic personal characteristics:

How to Become an A&P Certified Aircraft Technician

The FAA requires 1,900 hours of training. Our program at Tulsa Tech takes 18 months if you go full time for seven hours a day. If your go part time in the evening, classes are for 5 hours, four nights a week and it takes about 26 to 30 months.

Classes are held at our campus located at Jones Riverside Airport and include both academic instruction and hands on training working with aircraft engines and airframes. Here are some pictures of their training facilities 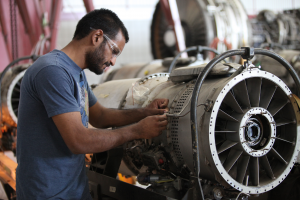 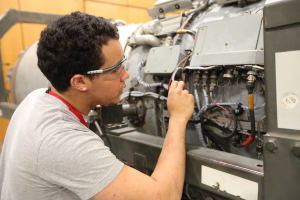 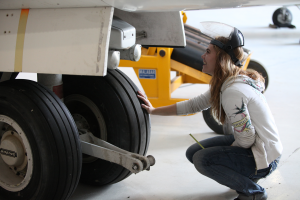 There is also an option for high school students to begin taking classes their junior and senior years. This gives them a head start and the program then only takes one year after they graduate high school. The cost is also lower and is only $2,400 for the year less any scholarships or grants.

I have enjoyed my various jobs in the aviation industry from being a technician to my present job as an instructor and program coordinator. Being an aviation technician is a career where you can earn a good hourly wage and where you get more responsibility and earn more money as you gain experience. The training for your A&P certification is 18 months if you start as an adult, and can be only one year after high school graduation if you start the program while you are a junior in high school. You can even go part time in the evenings if you are older and need to work to support yourself or a family while you are taking classes. The training is also affordable. All or part of the cost can be offset by scholarships and grants that are available to young people entering our training programs. So for those who qualify, you can get trained for a great career without having to incur student loans. It has been a very rewarding career for me and one I would recommend to anyone interested in aviation.

In May 2014, the median annual wages for aircraft mechanics and service technicians in the top industries in which they worked were as follows:

YPNG’s mission is to provide you with the information you need to research the many career options available, the training and skills that are required and each individual career’s economic prospects. We formed YPNG to help with career planning because making a good career choice is one of the most important decisions a young person will ever make.

Young People of the Next Generation, LLC. © 2021 All Rights Reserved.