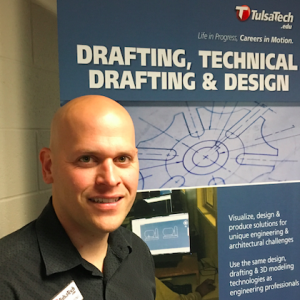 Michael is a Technical Drafting and Design Instructor at Tulsa Tech, a registered Architect and is a member of the National Council of Architectural Registration Boards (NCARB), an organization that protects the public health, safety, and welfare by leading the regulation of the practice of Architecture. He is also active in his church and the community.

Drafting is an important field because nothing can be built or manufactured until drawings and blueprints are completed and computer technology has changed the way these drawings are made. To keep up with the rapid changes in this technology, Michael has developed a curriculum for his drafting students that teaches them the latest Computer-Aided Design and Drafting programs including a program called Revit, which has become the program used by most local Architects and Engineers. These new computer programs all allow drafting to be done in both 2D and 3D and for revisions to drawing to be done more easily. The computer programs also do a lot of the hard math that used to be involved in drafting.

In his article, Michael points out that if you choose to work in Drafting and Design you have the opportunity to choose between many specialties. For example, people with drafting skills can prepare drawings for Architects working on commercial and residential properties or Civil Engineers building structures like bridges, highways and pipelines. Electrical Drafters prepare wiring and layout diagrams while other drafters draw assembly diagrams. Mechanical Engineers where you have the chance to be involved in the manufacturing process for things like Airplanes, Automobiles, Heavy Equipment and Consumer Products.

While most people who previously entered this career field loved drawing and art and had strong math skills, the new software does a lot of the drawing and hard math calculations. This means that it is now more important that you are comfortable using computers and like the kind of problem solving needed to use these programs to develop construction and product diagrams. You must also be able to pay attention to the detail required to produce the completed drawings. If you like using computers and are detail conscious, you can use your skills to build a successful career in drafting and design.

I grew up in the small town of Owasso, Oklahoma, a northern suburb of Tulsa. When I was in first grade my teacher told me that I was good in math and that I should be either an Architect or an Engineer. Being in the first grade, I didn’t know what either one was. So I told her I didn’t want to drive trains and thought I would like to be an Architect. I learned more about the field as I grew older and then met four friends in church who also wanted to be architects. All but one pursued architecture in some fashion.

When I graduated from high school in 2003, I first went through the drafting program at Tulsa Tech like the one I now teach. I then entered the Architecture program at Oklahoma State University. I was fully immersed in my studies and finished what was normally a five-year program in four and a half years and received my Bachelor of Architecture (BArch) in 2009. Drafting is not taught in the Architecture curriculum at OSU and when I started working I felt that knowing drafting and how to use the software programs gave me an advantage in taking projects from the design stage to the point where we had finished drawings and blueprints.

When I graduated from OSU in 2009, my second job was as an Architectural Intern for a local design firm that specialized in modern designs and represented an Italian supplier of kitchen cabinets. These all went into high-end residential and commercial properties. I worked on one home that was ten thousand square feet and cost close to three million dollars. My internship had me take on many tasks from being a designer where I produced realistic renderings for the clients and 2D and 3D drawings for proposals as well as budget estimates. I also did project management. I moved to another firm in 2011 that was still working on that same home and worked as a project coordinator. Then in 2013, I took a job as the Technical Drafting Instructor at Tulsa Tech. Two years later I also started my own firm, Doering Architects, where I am specializing in Residential and Commercial Architecture.

Since I have been an instructor, I have added new curriculum to my classes to make sure the drafting is up to date and the students know how to use the latest software. This new software has changed the way drafting is done. Most people are aware that drawing a plan is now done on computer programs with a mouse using Computer-Aided Design and Drawing Programs called CADD programs. But the past few years, drafting has evolved to where much of the work is now done on a particular program called Autodesk Revit. This program is modeling software that allows the user to design a building and its components in 3D. The relationship between components, views and annotations are captured in the program so that any change you want to make to any element automatically adjusts the entire model. For example, if you decided to move a wall, the program updates the neighboring walls, floors and roofs and changes the placement and dimension values. It will then automatically redraw section views and change the values for dimensions so that everything on the drawing will be consistent. Because changes to any one parameter drives the whole building model in Revit, the associated documentation and the revisions to a drawing are much easier that with other drawing system. That is what led to the name Revit, which is short for “revise it”. This new technology means that drafting now requires that you learn the skills necessary to operate this kind of computer program rather than having to do all the drawing and math calculations yourself. Consequently, computer skills and attention to the detail that is necessary to build these computer models is now more important in drafting than doing the math calculations that you would have done yourself before these programs were developed. While we still teach how to use CADD programs and get our students certified in these computer programs as well as Revit, it is the one that has emerged as the most used program by Architects and Engineers.

Here is an example of the way you might work with an Architect whose is designing a large, commercial building using Revit:

While a lot of people know about the drawings and prints used in constructing buildings, the local market in Tulsa also has a lot of businesses that build processing plants, manufacture different kinds of products and supply parts to major manufactures. So a number of my classes emphasize the skills you need to be able to work in these industries. This includes learning a program called SolidWorks, which is a Computer-Aided Engineering program that lets you do 3D modeling to create manufactured parts and assemblies. Because of the number of chemical process engineering companies in the area, we have students learn how to draw vessels, tanks and pipe racks used in chemical processing plants and put together flow diagrams where the feedstock comes into the plant and is turned into its various chemical products as it flows through the plant.

I have also added curriculum my Civil Drafting class where my students go outside and learn to do Surveying. Afterwards we come back to the classroom and put the surveyed points into drawings to show the topography.

My Tulsa Tech program runs for nine months full time and twenty one months going half days and also has an extended two year, half day high school program. The courses are designed to let you get the certifications you need to get an entry-level job in drafting. These certifications include:

Principles of CAD Design I

After the first year, students are asked to choose one of three areas of to emphasize in their second year:

We offer this program as an extended curriculum for participating high schools. A student attending Tulsa Tech earns three units of credit each year. Once you have successfully completed your classes, these units are certified by Tulsa Tech and transferred to your high school. You can also earn college credit towards an Associates degree from Tulsa Community College, Oklahoma State University or Rogers State University while attending this and many other Tulsa Tech programs.

While tuition is free to high school students. The estimated cost for adults for tuition and lab is $4,200. But there are a number of scholarships and financial aid packages available from local and federal programs that can offset this cost and few people have to take out student loans to complete the course. Check with Tulsa Tech’s financial aid office and they can give more information. Here is the link: http://tulsatech.edu/admissions/financial-aid.

Drafting can be an exciting career field because of the daily problem solving involved in producing 2D and 3D drawings and the variety of industries that hire people for drafting and design positions where you have the chance to be involved in building everything from bridges to manufacturing consumer electronics. This variety of jobs gives you the opportunity to build a career in an industry that fits your personal interests. While the new computer programs have automated a lot of what used to be involved in drafting and is expected to slow the growth for drafting jobs in building and construction businesses, there are other areas where demand for people with drafting skills is growing like manufacturing consumer products and building power generation plants and transmission systems. These are also the industries with the highest salaries. Drafting is also a good way to lean about other professions like architecture and engineering. My experience has been that having drafting skills will allow you to speak a graphic language that is universal across most industries, so whatever the field of study you would like to go into, drafting is probably used somewhere in that process.

US Bureau of Labor Statistics for Architectural and Civil Drafters

Median annual wages for drafters in May 2015 were as follows:

The highest mean annual wage was about $78,000 for drafting positions in these industries: