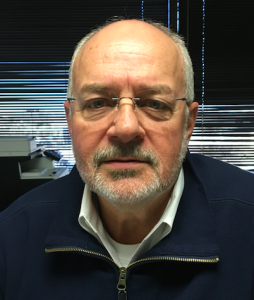 Mike is an experienced meteorologist who is one of three mangers at the National Weather Service Office in Tulsa. He also teaches in the Aviation Sciences department at Tulsa Community College and has been a mentor to many young people interested in meteorology.

The Tulsa NWS office collects weather data from Northeastern Oklahoma and Western Arkansas that is then fed into the main computer generated weather models for the US. The office also provides a number of local services including regional weather forecasts, storm alerts and also works with the Army Corps of Engineers to forecast river and lake elevations. This is important work that protects lives and property and helps people manage their businesses.

Mike did not start out wanting to become a meteorologist. When he graduated from high school, Mike joined the Air Force to try and get technical training because he did not have the money to pay for college. He scored high on his Air Force placement tests and was given the opportunity to be trained in meteorology first in weather observation and then forecasting. After eight years in the Air Force, he had earned two years of college credits and had gained enough experience to be hired by the NWS. He went to college under the GI bill while he was working and completed his Bachelor’s degree at Boise State during the time he was assigned to the Boise NWS office. Mike had a chance to move to Tulsa in 1987. Oklahoma is a desirable station for a meteorologist because of the active weather in the area. Plus he grew up just east of Tulsa and was able to move back to his hometown.

Mike points out in his article that meteorology is a well paying profession with good benefits. It is also a career that is always interesting because of changing weather patterns. Besides government jobs with the NWS, there are opportunities to work for media outlets, the military, and private forecasting services. But there are more people who want to become a meteorologist than there are openings. Mike explains ways that you can differentiate yourself from the other applicants that will increase your chances of being accepted. His article will be of interest to young people considering meteorology as a career as well as anyone who wants to learn more about the NWS.

I grew in Claremore, Oklahoma just east of Tulsa. When I graduated from high school I did not have the money to go to college and joined the Air Force as a way to get some training. When you first enlist in the Air Force, you go through regular basic military training like everyone else. But you also take placement tests that give you rankings in a number of academic categories the military uses to determine areas where you qualify for technical schooling. I scored high on these tests and was sent to the Air Force technical school for weather training. This school had two parts. The first was observation school, a seven-month program where they teach you to understand the basics of weather observation. The next was a nine-month forecasting school after which I was first assigned to Tinker AFB, and the Air Force’s main weather forecasting center in Omaha, Nebraska that did national and global weather forecasting. These forecasts supported Air Force combat and reconnaissance missions around the world including a number that were classified. While I was in the Air Force, I also went to college part time and earned two years of college credits.

After eight years in the Air Force, I separated and started college at the University of Oklahoma under the GI bill with the intention finishing my degree. But after a month, I was contacted by the NWS about a job. I decided to take it to gain more experience and earn some money. I worked first in Bismarck, North Dakota and then Boise, Idaho. After an eight-hour day working for the NWS, I went to school full time at Boise State and got a Bachelors Degree in business. This may sound unusual. But to become a certified meteorologist by the NWS you need both a certain level of experience and at least 24 credit hours in classes like calculus, physical sciences and dynamics, which teaches about atmospheric pressures. But there is no requirement that you have a degree in meteorology. I had experience from the Air Force and then working for the NWS and met the academic requirements from the classes I had taken. This combination of experience and academics allowed me to receive my certification as a meteorologist. In 1987, a position came open in the Tulsa office where I became the Data Acquisition Program Manager. This is a supervisory position where my staff is involved in data acquisition, forecasting and providing weather warning and statements to the public. Our observation programs cover eastern Oklahoma and Western Arkansas. As part of our operation, we also work with the Army Corp of Engineers to help them manage their systems of dams by forecasting river levels and flow rates and have our own hydrologists on staff.

The radar that we have at the NWS allows us to see storms both close to the radar, and at greater distances. This information is displayed in real-time so our staff can quickly determine the severity of storms, and issue any appropriate warnings. We work closely with local media outlets during severe weather by exchanging critical weather information. That information makes its way to the public via internet, radio, and the broadcasts the local media provide. We’re fortunate to have a good working relationship with the local media, as they are the ones that really reach the majority of the population with our warnings. Helping protect lives and property during serious storms is what they and the NWS do.

Working as a Meteorologist for the NWS

There are 122 NWS offices in the continental US and offices in Alaska, Hawaii, Puerto Rico and Guam that employ about 4,500 meteorologists. When you start out with the NWS you will have low seniority and the first location you work at may not be the most desirable to you. For example, it could be in a small town in a remote part of the West or an area of the country where the weather patterns are not that active and interesting for a meteorologist. But as you gain experience, you will have an opportunity to get the jobs in the offices you want like I did when I was able to move back to Tulsa.

The NWS operates 24/7 every day of the year. Days are broken into three eight-hour shifts from 8 to 4, 4 to 12 and 12 to 8 and you work five days a week. The five-day shifts rotate so that you can work different hours during the day and different days of the week. For example, if you start on Monday one week and don’t work on the weekend, you will start on Tuesday the next week and work Saturday and then start on Wednesday etc. You do get to build up vacation time, something that grows the more time spend with the NWS. But this work schedule is something you need to consider if you choose meteorology as a profession because you will frequently have to work evenings and weekends and holidays.

NWS meteorologists receive government health insurance and pensions as well as accumulate sick pay. While you must use your vacations time or lose it, you can accumulate your unused sick pay up until the time you retire when it will be paid to you.

How to Prepare for a Career as a Meteorologist

Meteorology had been an interesting career for me where I have been able to study weather systems on a local, regional and global scale. It is also a career that I feel does important work protecting people’s lives and property and helping them manage their farms and businesses. Because studying the weather is something a lot of people become interested in before they leave high school, there are more people looking to enter the field than there are new positions. If you decide you want to pursue meteorology as a career, you should understand that you have to differentiate yourself from other applicants by getting good grades in college and doing things like internships or receiving weather training in the military where you can gain experience and build relationships with the people who might hire you or give you recommendations. The pay for meteorologists can be higher than most other jobs that require the same amount of training and will give you the chance to provide a good life for you and your family. This is not a 9 to 5 job. You will be working shifts at different times during the day and you will have to share weekends and holidays. But the schedules are made far in advance so you can plan your personal life. Meteorology is a career that I have enjoyed and one that I would recommend to any young person with an interest in meteorology and the academic ability to qualify.

US Bureau of Labor Statistics for Meteorologists

In May 2014, the median annual wages for atmospheric scientists, including meteorologists in the top industries in which they worked were as follows:

Most atmospheric scientists work full time. Weather conditions can change quickly, so weather forecasters need to continuously monitor conditions. Many, especially entry-level staff at field stations, work rotating shifts to cover all 24 hours in a day, and they work on nights, weekends, and holidays to provide the most current weather information. In addition, they work extended hours during severe weather, such as hurricanes. Other atmospheric scientists have a standard workweek, although researchers may work nights and weekends on particular projects.